"Touched by an Alien" Short comedy about space explorers that discover a new kind of alien. 5 actors of any gender (plus possible non-speaking roles).

"Pity the Fool" Short play about an artist looking for some pity. 2 m 2 w.

"The Curse of Rumpelstiltskin" play for 8 actors of any gender. The play is written for 8 females but any part can be played by a male. This story touches a little bit on the fairy tale but might be more Harry Potter or Beetlejuice than a typical telling.

Or check out a work in progress called
"Stranger Stuff: Mysterious Things at the Mall"
(a Stranger Things satire)

Or just get some Stranger Things stickers :) 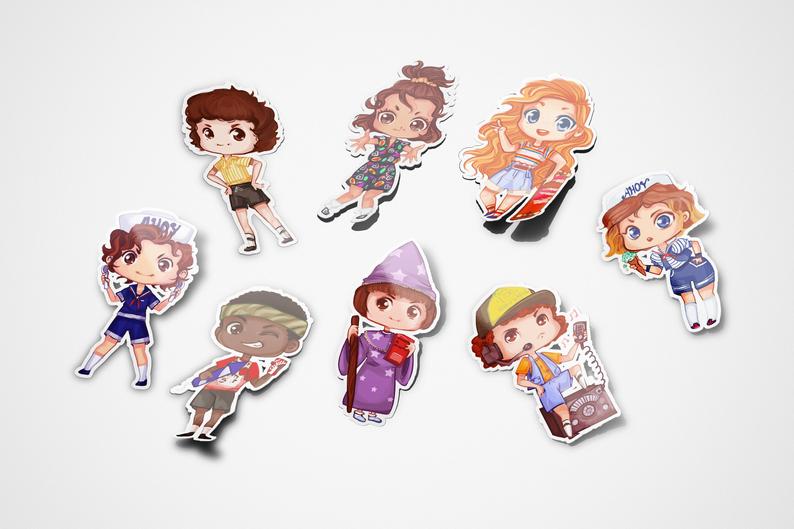 "The Hysterical History of the Trojan War The Trojan War has never been so funny. This is still Homer's story but with a twist. 13-18+ speaking roles and potential for unlimited extras.

"Blinded by the Knight" comedy play about a comic books store, a couple of nerds and beauty queen - 3 m 2 f

"Princess from Another Planet" Short play about an artist looking for some pity. 2+ m 2 w with possible extras.

"Worrying About the Future (A Comedy)" is a scene from the published play "Control the Future" ISBN-13: 978-1540666581. This is a short play script for two either (male or female - one child actor and one adult character - or it could be two siblings - one older and one younger).

"Rock, Sword, Firecracker!" Short comedy about the legend behind the game of Rock, Scissors, Paper. 3+ actors (any gender)

"One Way or Another" A short play for two actors (one man, one woman)

"The Boy Who Cried Genie" A short play about a guy who wishes he didn't get wishes. 1-2 males, 4-5 females.

"Kisses Like a Redneck" with 3w 2m
which is a selection from the popular full length play "Operation Redneck" (3w 3m)
created from the short play "The Redneck" (4w 3m).

"The Hysterical History of Cleopatra" by D. M. Larson

(This is an interactive play with audience participation. Before the play begins, some of the actors should practice the following with the audience. NUT is the chant leader but others in the cast can help. If extra actors are available, you can have someone appear with a sign with the audience phrases in bold)

When NUT cues you with "Cleopatra" say - "All hail Cleopatra!"
When NUT gets excited about snakes, go "Hiss!"
When Alexander the Great is mentioned say, "He's grrreat!"
When you hear "Little Caesar" say "Pizza! Pizza!"

SHU
Thank you all for coming. We have a major PR problem here. The Ptolemy family is a royal pain in the Nile and we have to do something about it.

BABI
How we long for the days of Alexander the Great.

SHU
Things were great then.

GEB
The Ptolemies had to go and ruin it all. They are a bunch of greedy, self-centered rulers with no concern for the common people.

NUT
What ruler has ever cared about the people?

GEB
Siri? Were any of the pharaohs good to the people?

BABI
How about you, Alexa? Can you top that?

ALEXA
Queen Hatshepsut achieved a peaceful rule over a prosperous Egypt for over 20 years and created many public works programs that benefited the people.

SHU
The people are very restless under Ptolemy rule. Perhaps it is time for a queen again.

SHU
Indeed. At long last, I believe we have a Ptolemy we can get behind. Her name is... Cleopatra.

(NUT and other cast members get the audience to cheer)

SIRI
Cleopatra has been joint ruler with her father Ptolemy XII Auletes and then with her brothers Ptolemy XIII and XIV.

BABI
The guys keep dying though.

GEB
They were holding Cleopatra back.

BABI
Why support any of the Ptolemies? They are proud Greeks and refuse to even learn the Egyptian language.

ALEXA
Cleopatra is fluent in Egyptian and Greek as well as 7 other languages. She is the first Ptolemy to learn our language.

SIRI
She says she is the reincarnation of the Egyptian goddess Isis.

BABI
Is that true?

ALEXA
Isis is the goddess of health, marriage and wisdom...

SHU
Never mind, Alexa. The important thing is that we finally have a Queen we can support. And we need to make this work. With the Roman armies growing in power, we have to make ourselves strong again or we'll be overrun.

SIRI
The Roman armies are led by Julius Caesar.

ALEXA
He wishes to reunite the lands once ruled by Alexander the Great.

SHU
Without a united Egypt under a strong ruler, I'm afraid Rome will conquer us. So I have gathered all of you here to develop a PR campaign to get the people behind our Queen.

BABI
Let's start with a branding campaign. We'll come up with a new slogan and a cool logo.

NUT
What about something with snakes?

GEB
We can do something with the whole Isis angle. Let's play up the whole Egyptian goddess reincarnation idea.

BABI
I'll write some speeches in Egyptian that she can address to the people.

SHU
I'll schedule some rallies around Egypt. We'll want to get her out with the people.

GEB
Parades! We must have a grand parade all around Egypt. She'll arrive at every major city in style.

BABI
And we'll end with a river cruise back down the Nile to Alexandria.

SIRI
One of Cleopatra's favorite places there is the Royal Library of Alexandria which is one of the most important libraries in the world where many famous scholars have studied.

SHU
We can end the tour at the library and solidify her image as a wise ruler who will guide her nation with intelligence. Let's go to work, people.

SIRI
Most of the books in the library are written on papyrus scrolls made from the papyrus plant.

ALEXA
The library was created by Ptolemy I and contains an estimated 400,000 scrolls and books.

SIRI
Ptolemy I is said to be a descendant of Heracles.

ALEXA
Alexandria is named in honor of Alexander the Great.

NUT
Will you two give it a rest?


Buy a low cost PDF of the full script on Sellfy.com


Or find more free previews of plays below!

Freedrama offers free stage play scripts, monologues and theatre games at no cost to actors, directors, teachers and students for the classroom or acting performances. Find tons of resources for teaching and learning acting, speech and communication skills.


These scripts may be used for FREE but PLEASE do NOT repost the TEXT of any script online in any way. Students, actors, teachers and student may use the scripts for acting or classroom activities and even videos, but do NOT repost them on the internet. Please link to the scripts on the website. We love that! But these scripts are published and protected by copyright (c) 2001-2018 so do not upload the text of a script. Performing the scripts for an audience or on a video is totally okay. Just be sure to credit the author and our website (Freedrama.net). Thank you!

*All mentions of the script should include the author (D. M. Larson) and the source (Freedrama.net).

Freedrama provides free stage play scripts for actors, directors, teachers and students. Our free theatre resources are for both schools and theatre groups. Freedrama also has free help for new actors including a no cost online acting school. Improve your acting and communication skills with our variety of educational materials including improv drama games and fun learning activities such as MadScripts.

Free Monologues for one TEEN Actor

Free One Act and Full Length Plays for TEEN Actors

Free One Act and Full Length Plays for CHILDREN


VIEW LIST OF ALL FREEDRAMA SCRIPTS (with ISBN info)